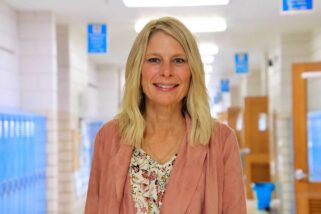 It was a very exciting first day of school as Notre Dame Academy was featured on KSTP, Channel 5. KSTP followed enrollment growth in private schools in the metro area over the past couple of years, and chose to stop by NDA to check in on the first day.

Catholic schools across the metro grew in enrollment during the 2020-21 school year. According to the Catholic School Center of Excellence, K-8 Catholic schools in the metro welcomed over 1000 new students last year, and over 90% of those families returned this year. Notre Dame Academy saw an 11% growth rate for the 2020-21 school year. NDA retained 95% of their students in grades 1st-8th for the 2021-22 school year. Notre Dame Academy continues to see a 95-96% retention rate year after year after year.

The news story captured NDA’s 5th graders embarking on a scavenger hunt in Mrs. Dysart’s room as they acclimated themselves to their new classroom. The story also featured Jessica Miles, a Channel 5 reporter, interviewing Dr. Jungels about the many reasons families continue to invest in Catholic education. The story ran three different times, once each during the 4:30pm and 6:00pm broadcasts on August 30th as well as the morning of August 31st. You can learn more about NDA’s faculty and staff on the staff page, and watch the recent news story on KSTP.