For the past several years, the Notre Dame Academy student council has lined Excelsior Boulevard with flags to honor our Veterans.

As cars drove past, many honked their horns in appreciation of our flag display. In addition to lining the sidewalk with flags, our student council shared facts about today in our morning announcements.

“Every year on November 11, people in the United States celebrate Veterans Day. The holiday honors veterans, or people who served in the U.S. military.

To celebrate Veterans Day, some cities and towns have parades. Veterans from the area may march in the parades. Sometimes people visit cemeteries on Veterans Day, and People may put flowers or flags on the graves of veterans to honor them.

Veterans Day used to be called Armistice Day. (An armistice is an agreement to stop fighting.) Armistice Day was created to remember the end of World War I on November 11, 1918. The first Armistice Day in the United States was in 1919.

Armistice Day became an official national holiday in 1938. In 1954 Armistice Day was renamed Veterans Day to remember soldiers from all wars, not just World War I.

Mrs. Gross’s 3rd grade class received a note from a family who currently has a member of their family deployed. This NDA community member wrote, “Good morning, Mrs Gross’s third grade class! Thank you for honoring all the Veteran’s today! You have shown so much respect and gratefulness

for their service. Your words mean so much. I’m sure many of you have family who have served or are serving for our beautiful , free country.

Give them and Extra hug!  Love to you all!

Today we honor our American Veterans. May God bless them and their families. 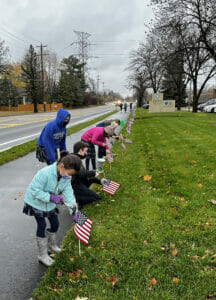 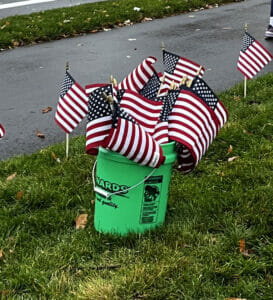 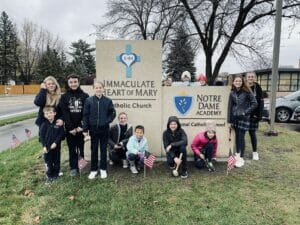 Middle school students with their flags on Veteran’s Day.